The Holmen-owned Varsvik Wind Farm, close to Hallsta paper mill, is helping Holmen to become one of the most sustainable paper producers in the world. It’s also changing the future of the global energy system.

The Varsvik wind farm, inaugurated in 2014, lies some 100 km north of Stockholm on the edge of the small town of Hallstavik.

“There were many different reasons for Holmen to have a wind farm,” says Rikard Nilsson, technical director at Holmen Energy and managing director of Varsvik Wind Farm. “It was, for one, a good way to use our land. It could be used for both forestry as well as producing renewable energy. But the main reason was that we saw wind power as a key component in a fossil-free society.”

For Holmen, a huge reduction in emissions from fossil fuels is essential, when major changes to the global energy system are necessary.

“We have adopted the Paris Agreement and the goal not to increase the temperature by more than 1.5°C. Holmen Group has, in fact, reduced its use of fossil fuels by almost 90% since 2005.”

“Many businesses today are dependent on fossil fuels,” says Nilsson. “The solution to end that fossil fuel use is electrification. But electricity is not produced out of nothing – it needs a source that is fossil free. And we have the possibility to contribute with wind power.”

There are, of course, a number of renewable energy sources, such as hydro, wind and solar power, and Holmen already has several hydropower stations in operation.

“We don’t have that many hours of sun here in Sweden though,” Nilsson smiles. “And hydropower cannot be increased due to water environment considerations, but there is a good wind resource across big parts of the country. So wind power is the most competitive electricity source you can invest in in Sweden right now.” 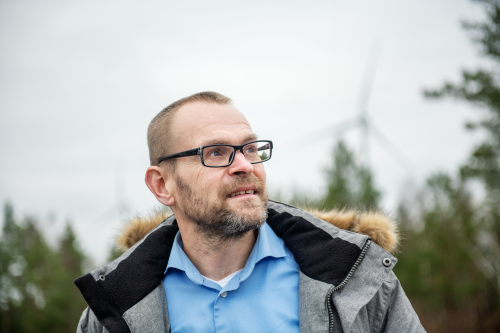 The proximity is no coincidence

For 100 years, before the arrival of the wind farm, the town of Hallstavik was dominated by the Holmen paper mill. The paper mill now sits literally in the shadow of the Varsvik wind turbines. The two sites sit opposite each other across the water of the bay that opens out into the Baltic Sea 12 km away. And while they’re not directly linked, it’s no coincidence that both facilities are here.

The Hallstavik Paper Mill began operating in 1915. And while it is still the biggest employer in town, it has of course changed considerably over the years. The huge mill complex consists of a patchwork of industrial architecture from across the ages.

There are one or two old buildings from the very beginning that ooze character. Some are from the 1970s and resemble the set of a dystopian science fiction movie. Then there are more modern constructions. It is these newer ones that support the modernisation of the mill and in particular the drive towards sustainability.

Sells to the grid

The power generated at the Varsvik Wind Farm is sold directly to the electricity grid. While it could be used directly by the paper mill, Nilsson says that Holmen wants its renewable energy production to have a much wider remit. But, he adds, the wind farm is a business that works well with the mill's ambition to remove fossil fuels completely. Ultimately, Holmen wants to be seen as the most sustainable producer of paper on the market. And its mill at Hallstavik goes a long way to achieve that ambition.

Among the mill's 350 employees is a sustainability and development team made up of 20 members, led by sustainability manager Mikael Wahlgren. “My responsibilities include product and process development and the business around the by-products,” Wahlgren says. “We sell, for example, the bark from the logs to power companies to produce electricity and heat in the Stockholm area. And we sell sludge from the effluent treatment which is decomposed and used for soil.”

No CO2 emissions from the mill

The sustainable credential that Wahlgren is most clearly proud of though is the mill's claim to be fossil free. “We have no CO2 emissions from the production at the mill at all, which makes us very special,” he says. “That's because we don't burn anything. We need steam to dry the paper in the paper machine but we get that from the pulp production where we refine the fibres. The steam is generated by the water in the wood.

“The main things we need to produce paper here at the mill are wood, water and electricity.”

“The main things we need to produce paper here at the mill are wood, water and electricity,” Wahlgren continues. “The water comes from the lake system outside, and because of a SEK 90 million investment in a new effluent treatment facility last year, we return the water back to the sea even cleaner than it was when we took it.”

Wahlgren adds that although they need to buy a lot of electricity to power their machines, it is bought from the grid. The grid is increasingly being supplied with electricity generated from renewable resources.

The wind farm, like the paper mill, was built at Hallstavik because they are close to where the consumption is. The mill used to supply paper for the Stockholm newspaper industry and the wind farm supplies electricity to southern Sweden, where most of the population lives. In a further example of circularity, the wind farm site also produces trees used at the mill.

Wahlgren adds that the sustainability of the mill is an important consideration for customers, especially book paper customers. And with Hallstavik Paper Mill running one of the largest book paper production lines in the world, it's useful to have the wind farm next door.

“It's very visible,” he says. “When customers visit we can explain to them that the wind farm is partly owned by Holmen and that increasing the amount of renewable energy we use in our paper production is an important goal for us.”

“We are definitely one of the most sustainable paper producers on the market now,” Wahlgren adds. Plans to make the paper mill even more sustainable include making the logistics of how paper is transported to customers even more efficient. And we're always looking at how we can use less electricity.”

The future of Holmen wind power generation is meanwhile proceeding at pace, with plans for four more wind farms around the country at various stages of development. “It's really good to work with sustainability and make a difference to society,” says Nilsson. “But of course you can't do that by losing money. It has to be an economically sustainable business.

“Renewable energy is a key component in making the transition from a fossil economy to a circular economy,” he adds. “Wind power will have a major role in that mix and the future world energy system which aims for zero carbon dioxide emissions.”