How generation Z interacts with print

Readers in their early 20s may not be the first group you’d expect to see returning to “old school” print?

A decade ago, few magazine publishers would have looked to 2020 and predicted that 20-year-olds may be more likely to read a paper copy than their parents. But that’s what happened in the case of news weekly The Economist.

“It turned out that digital-only subscribers skewed older than the subscriber base on average, and print-only ones skewed younger,” says Tom Standage, the news weekly’s deputy editor.

He puts the recent phenomenon down to image-consciousness. “We suspect that younger readers may wish to be seen with a physical copy of The Economist, exploiting its value as a badge brand,” he muses.

The Economist is far from an isolated example. According to Steve Watson from Stack Magazines, which chooses a different independent magazine to send to subscribers every month, the under 25s are leading a rebirth for a certain type of design-led publication.

“It’s just easier to understand when you read something on paper.”

“It’s easier to read on paper. You can get quite exhausted sitting in front of a screen all the time,” Hannes Boman says. “It’s just easier to understand when you read something on paper.”

Enjoying spare time off the screen

His view is shared by 26-year-old London-based solicitor Nicholas White, who subscribes to Guardian Weekly, The London Review of Books (LRB), and The New Yorker.

“I find the experience better, holding it in my hands, rather than scrolling. And I like that that there’s a beginning and an end to it. Online, there’s just endless amounts of material, whereas with a physical magazine, it has already been whittled down,” he says. 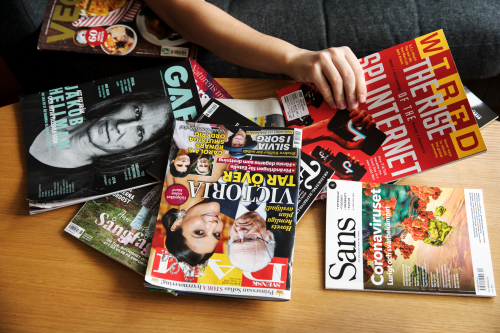 The return to print challenges a wide-held perception that today’s youth spends all its time and energy on their mobiles and other forms of digital media.

“For people who don’t spend all their time using screens and the internet, there’s some fun in doing the iPad thing,” White suggests. “But the reverse may be true of younger people. It’s your spare time and you want to enjoy it, and more time on the screen isn’t necessarily how you would want to do that.”

It’s a small but significant shift. And while nobody expects purchase levels to return to those of 10 years ago, the phenomenon of younger generations returning to printed magazines nevertheless represents a chink of light for the beleaguered industry.

Which paper is actually best?

Read about the results

To make the 785-page The Fountainhead easy to read and not too heavy to carry, LAPAS chose Holmen BOOK paper.