A paper glossary for all your needs

Opacity, bulk, smoothness – the list goes on. There is a lot to think about in the world of paper and a lot of different terms to describe the properties of paper. Here is a quick guide to the universal language of paper.

The term wood-free paper does not mean that no wood is involved in the production. It refers to printing and writing paper made with less than 10% mechanical pulp. The chemical process for the manufacture of pulp for wood-free paper uses around 50 per cent wood. The benefit of wood-free paper is high brightness, but it comes at the cost of poorer opacity. WF paper is also referred to as “fine paper”.

As the name indicates, LWU (Light Weight Uncoated) paper is produced with no extra coating. It has a smooth surface after being pressed through a calender. Another component that increases the smoothness is the amount of filler (pigment) added to the paper, which also improves the printing properties. LWU paper is versatile and often used in magazines, catalogues, and direct marketing among other things.

SC stands for Super Calendered. SC-paper is an uncoated paper that has undergone extra calendering (polishing) thus, super calendered.  The paper also contains a large amount of filler (pigment) to increase the smoothness and improve the printing properties.

Light Weight Coated paper, LWC, is a collective term for particularly lightweight paper stock (of grammages less than 60 g/m2) that has a surface coating layer. The coating consists of clay and binder agents, which are applied by a special coating unit. LWC paper is available in several varieties regarding brightness, opacity, and grammage, and is mainly used for magazines and other publications that require excellent printing quality.

The a* and b* values describe the shade of the paper. a* corresponds to the red/green scale and b* corresponds to the blue/yellow scale. The higher the a* value, the redder the paper. The higher the b* value, the yellower the paper. The key is often to find a balance between green/red and blue/yellow, in order to produce a paper that is felt to be easy on the eye, while also looking white. The L* value defines the brightness of the paper. 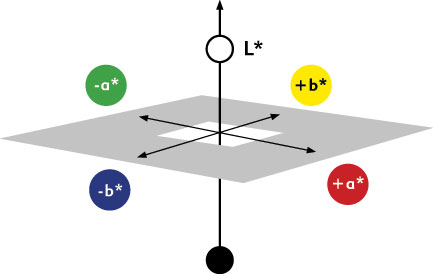 The value for bulk describes how voluminous the paper is, and is measured in cm3/g. Two different papers can have the same basis weight but different bulk, which means that the paper with the lower bulk has usually been compressed (calendered) more in production.

The lower the bulk, the thinner the paper. Paper made from fresh fibre has advantages in terms of bulk, since the fibre is more voluminous than recovered fibre which has already been used one or more times in paper production. The opacity is also better in a paper with high bulk.

A paper's thickness depends a great deal on the type of raw material in the paper. Fresh fibre offers better scope to produce a thicker paper compared with recovered fibre. Thickness is measured in micrometers (µm), commonly known as microns, and it is worked out by multiplying the basis weight and the bulk.

This describes the smoothness or roughness of the paper's surface. Smoothness is measured either in µm according to the method Parker Print Surf, PPS , or in ml/min using the Bendtsen method. In both cases, a lower value means a smoother surface.

The smoother the surface, the better the potential for good print results. The more even the paper, the greater the opportunity for detailed image reproduction that closely resembles the original.

The halftone dots are bigger on a paper with an uneven surface. This is because the printing inks flow out into the irregularities. This is called dot gain. The effect is a darker printed result and images that can look fuzzy. The number of shades falls and the transitions between different colour tones become less clear. Using too high a screen frequency can, in the worst case, cause clogging in the print, where the darker sections of the images soot up and become black.

Opacity is a measure of the paper's transparency. Different paper grades have different opacity. This is because they have a differing capacity to absorb and disperse light. Opacity is an important parameter since you don't want what is printed on one side of a page to show through on the other.

In a glossy/calendered paper, the paper base is thinner and more transparent. The surface is smoother, which also increases its transparency and opacity deteriorates further during the printing process, particularly when printing dark, high-coverage surfaces. This is because the oily ink seeps down into the paper and makes it more transparent.

Uncoated, glossy, white paper in low basis weights can thus be particularly problematic when it comes to opacity. The opacity can be adjusted via the quantity and type of pulp, filler, calendering and the brightness of the paper.

The approximate values for the opacity of printing paper are 89–97%.

A measure of how well a paper retains its properties over time.

How the paper changes along its length and width depending on moisture levels. The bigger the change from the original size, the poorer the dimensional stability.

The weight of the paper measured in grams per square metre, g/m². Basis weight can also be referred to as grammage.

A blend of primarily paper pulp and water that is sprayed into the paper machine where the paper web is formed and dried.

The direction in which the majority of fibres lie in the paper web. The fibre direction is controlled by the angle and speed of the headbox nozzles when the stock is sprayed onto the blanket. Changing the fibre direction can affect the stiffness of the sheet.

A fine mesh fabric in the paper machine over which the paper travels. The wire lets water pass through so that the paper is dewatered when it travels over it.

Calendering is a process where steam, heat and pressure is used to change the properties of the paper surface and give it more gloss. The paper is pressed between two hot rollers under high pressure with added steam. One roller is steel and the other is made from a plastic polymer. The calendering process is not unlike ironing a shirt.

A substance in paper manufacturing that comes from the cell walls of wood. The lignin makes wood-containing paper yellow when exposed to daylight.