The magic of Elton John printed on Holmen BOOK.

The magic of Elton John printed on Holmen BOOK

“Live for each second without hesitation” says the man who describes himself as someone who spent a lot of his childhood trying to be invisible. Sir Elton John’s self-biography ‘Me’ certainly isn’t invisible – the book is flamboyant and sparkling with an honest and humorous voice.

Holmen BOOK was the paper used in Sir Elton John's self-biography ‘Me’ by UK book publisher Pan Macmillan. The book has received very good reviews from both critics and readers.

Sir Elton John is the world-famous singer-songwriter, pianist and composer who has sold over 3 million records. He is the third most successful artist overall on the US charts, only passed by The Beatles and Madonna. He has recorded over 450 songs, most of them composed by himself together with his lyrics partner Bernie Taupin.

But the book’s focus is not set on Elton John’s fame, more on his inside experience of fame. This is a very personal story. It's about growing up and trying to cope with the upsides and downsides of life as a performer, told with a disarming self-distance and humour. Just like the film Rocketman, the book doesn’t shy away from his struggle with addiction. Nevertheless, his touching story is bigger than that.

“Sir Elton John’s autobiography was one of the biggest and most exciting projects we have ever embarked on”, says Simon Rhodes, Head of Production, Adult books at Pan Macmillan, one of the largest general book publishers in the UK.

The reception of the book has been very good, both from media and general readers. The critics seem to be united for once:

“‘Rocket Man’ star’s autobiography is full of warmth and candour”, says The Independent.

“Elton has never been one to hold back difficult truths”, wrote The Rolling Stone.

Not far after its release it reached position No1 on the New York Times Bestseller list.

A partner to trust

For such an important book project, the choice of paper is a vital piece of the puzzle. Pan Macmillan had good experience from Holmen Paper since earlier productions, so the choice was not difficult to make. Holmen BOOK Cream, bulk 2.2, 65 gsm, with a smooth, clean surface for easy and pleasurable reading, was used for the text paper. 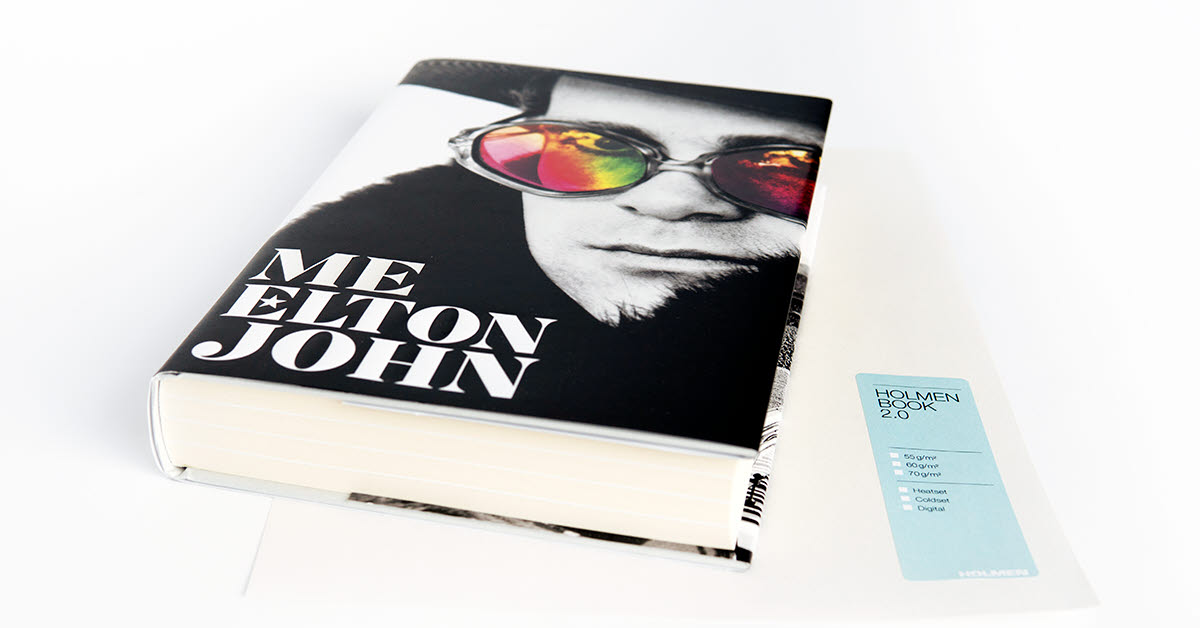 “Our relationship with Holmen Paper has always worked really well. I knew that we were in safe hands with this book”, says Simon Rhodes from Pan MacMillan. He refers to the challenges of Brexit and the exceptional demand during the end of 2019, when the book was about to print.

“We strive to keep our service level high, also in difficult times”, says Roger Vian, London-based commercial director of Holmen Paper. “As a company we are used to working closely with our customers. We try to walk the extra mile by caring for their coming needs. This is easier when we have long-term relationships with the buyer, as in this case, but our personal care is of course extended also to new contacts.”

“Continuity of supply was seamless. Together we were able to meet and exceed all manufacturing and delivery requirements”, confirms Simon Rhodes.

The magic of co-working

Finding the right partner is always important. One of the most joyful reads in the ‘Me’ book is when Elton John in the early chapters describes being paired up with Bernie Taupin. After being rejected by a record company, he was – mostly by chance – handed an envelope with texts written by a guy working on a chicken farm in a small parish in the British countryside. It seemed as an unlikely match at first.

“But his lyrics were pretty good. Esoteric, a bit Tolkien-influenced, not unlike ‘A Whiter Shade Of Pale’ by Procol Harum. Crucially, none of them made me want to rip my head off with embarrassment, which meant they were a vast improvement on anything I’d come up with.”

They started writing songs together, without even being in the same place. Bernie Taupin sent the lyrics by post. Elton John sat in his mum’s and stepdad’s flat in another town, writing music. He describes it as something that really clicked for them both.

“I had to have the words written down in front of me before I could write a song. I needed that kick-start, that inspiration. And there was just a magic that happened when I saw Bernie’s lyrics, which made me want to write music. It happened the moment I first opened the envelope, on the tube train home from Baker Street, and it’s been happening ever since.”

It goes almost without saying that Holmen Paper would like to be a part of the same type of magic for the book publisher. The printer should be able to trust the continuity of the paper delivery as well as the quality – a stardust sprinkle of everyday magic contributing to making their life easier. The paper should be the best medium to spark interest when the reader takes in the content.

The choice of paper supplier doesn't only matter for the pleasure of the individual reading experience. It is also important for the production chain and the environmental impact of book consumption in general. Holmen as a company is going further than basic environmental standards.

All Holmen’s papers have carbon footprint calculations and paper profiles that show emissions and energy used per tonne of paper produced. By managing growing forests and making optimum use of all the raw material in energy-effective production processes, Holmen Group reduces carbon dioxide in the atmosphere by close to three million tonnes per year.

“Sustainability is key for us. We expect our suppliers to behave responsibly and with high levels of engagement in this regard”, says Simon Rhodes for Pan Macmillan. “Holmen’s efforts around carbon emissions and sustainable energy are just two areas where they have demonstrated real commitment to environmental care.”

Commitment from everyone is important to achieve the best result, and the publisher is happy with the outcome.

“Sir Elton’s commitment to making the book a success has been reflected in great sales, reviews and a really entertaining, funny and honest autobiography“, Simon Rhodes says for Pan Macmillan.

The golden age of manga

The natural feel and the slight roughness of Holmen TRND makes it perfect for reproducing the real manga feeling.