This week I, Magnus Rydstrand, am the Writer of the Week for Holmen's employee blog. I work as a Production Engineer at Hallsta Paper Mill.

Some of you might recognise me as the Energy Engineer who worked out whether it was possible to meet the mill’s demand for steam without burning any fuel. The question was put to me in 2012, after five years as an energy engineer, and the answer led to an exciting project that transformed the entire mill. I was involved in the whole journey, from ideas about greater energy recovery to implemented measures that culminated in the boilers, which consumed 400 GWh of fuel each year, being taken out of service in 2014. As a result, Hallsta has become the first paper mill in the world to meet its steam needs without burning any fuel. 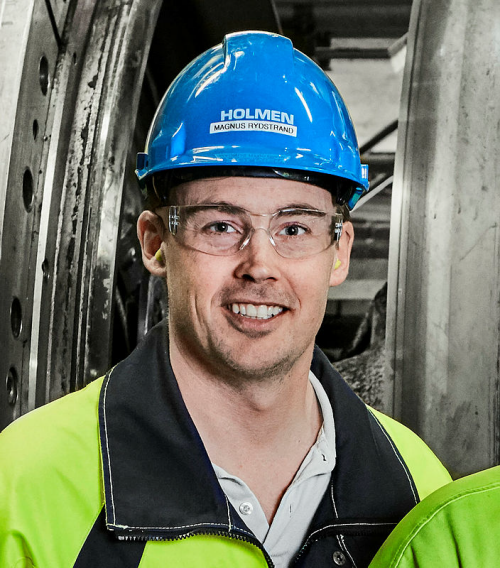 I come from Stockholm and began studying at KTH Royal Institute of Technology in 1997. I expanded my knowledge of energy technology and later worked as a consultant in Stockholm and on the supply side in thermal energy. I joined Holmen and Hallsta Paper Mill in 2007, which also meant going from an apartment in the suburbs to a house on Väddö. It felt a bit strange to move out to the countryside, far from all the street lights, and after my first year in Roslagen I wondered whether I had done the right thing. As a private person, I am rather change averse, but now Norrtälje Municipality feels like home to me and my wife, and our three children are native ‘rospiggar’, as the locals are known.

At work, I seek out excitement and want to be involved in change, which is why for two and a half years now, I have been working in production, where new things are happening all the time and change is part of everyday life. In my next post I’ll tell you a bit more about Hallsta and how my colleagues and I work together.

Hallsta Paper Mill currently has a workforce of around 360 people. The mill covers a large area, as you can see in the photo below, taken from the north. The pulpwood comes in at the north end and the paper leaves the mill from the south end, where it is loaded onto a ship or driven away on a lorry.

My responsibilities as a production engineer stretch from the wood chips to the bleached pulp that is pumped to PM12 (Paper Machine 12). This part of the process is also covered by a technician and two operators working in shifts. The operators rotate within several parts of the Pulp section, so I might end up working with around 30 different operators. Since we only ever briefly meet our shift-working colleagues, it is vital to have good lines of communication. To keep each other informed, we hold meetings in the control room and talk via a logbook system called ProTAK.

The Pulp section is divided up into four different areas of responsibility. Engineers and technicians work together a lot in their area to solve any problems that crop up and to improve the process so it works better. If we hit a problem that we can’t resolve, there is usually someone else who can help, which means that you never feel like you are on your own. Many discussions take place over coffee with the various engineers and technicians, and with the maintenance staff, who are in the same building. If something is not working properly or if you want some extra checks done, maintenance and the lab are close at hand and ready to help. When problems arise that require more detailed investigation, or if investment is needed, we involve Development or the Project Department. In the next post, I will tell you what a day at work can look like.

Join me for a day at work! Since coronavirus is affecting everything we do right now, I have chosen to talk about a day a few weeks ago that gives a better idea of what a normal Friday might look like…

This close to the weekend, I always hope that everything will run smoothly. I want to be able to pack up for the week with all the loose ends tied up, so there are no surprises for my colleagues on the weekend shifts.

I clocked in at 06:30. The early start is my own choice and it gives me time to get up to speed before the first meeting with maintenance at 07:15, where the urgent jobs for the day are discussed. Things were quite quiet in my areas of responsibility, so there was time before the meeting to talk to my technicians about problems that had arisen and plans for the day. There was nothing urgent to discuss with Maintenance in the meeting, so we talked instead about a trial we were going to run during the day to bleach the manufactured pulp in a new way.

At 07:45, we had a meeting with the operators who were on their first shift after their leave. Everyone present in the Pulp section gathered in the control room to review what was new and what was planned. The meeting was attended by six shift workers plus an additional 12 daytime colleagues. Some co-workers from the Development Department also showed up because of the new bleaching trial.

After the meeting, I had an opportunity to talk to the operators in a little more depth about what had been going on overnight. It turned out there was a counterbar to a plug screw that had ended up in the wrong position, so the counterbar was unable to operate. It doesn’t happen very often and is easy to fix if you know how.

My technician had also prepared for the installation of a pressure sensor after a pump had caused problems. The operators had therefore stopped the pump and sealed off part of the process so the pressure sensor could be fitted. With the pump back up and running, I checked the pressure, which turned out to be too low. The pressure at design flow was supposed to be 3.0 bar but it was only reaching 1.5 bar, as shown below. 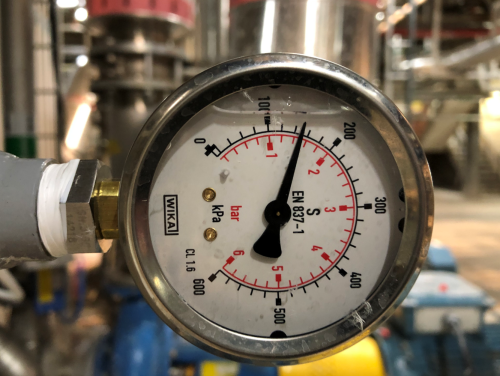 I then spent some time contacting the project manager for the project that included the installed pump and describing the problem. It was agreed that the project manager would pass the information on to the supplier, so the problem could be resolved without Holmen having to bear the cost. With that, my working day was done, and all that remained was to wish the operators on the afternoon shift a good weekend.

There are lots of great things about working at Holmen. When I started 12 years ago and I heard that the average employment time was close to 20 years at Hallsta Paper Mill, I thought it had to be a slight exaggeration. Maybe people stay this long because there are always new things to learn and no two days are the same. For my own part, I feel there are always opportunities for development and improvement, both on a personal level and regarding the process you work with. The company is also constantly driving to be better and more sustainable.

Over the years I have been involved in many different things, including strategic investigations and projects large and small, as well as working in various parts of the operational organisation. To some extent, I have been able to choose the kind of work I enjoy, while always having a clear idea about the ​​responsibilities of my job.

Holmen feels like a small company even though it employs so many people. Having worked here for 12 years, I am confident that management is developing the company with a sustainable and long-term perspective. Having a stable owner also feels good. All this probably means that I and many others will stay at Holmen for at least 20 years. 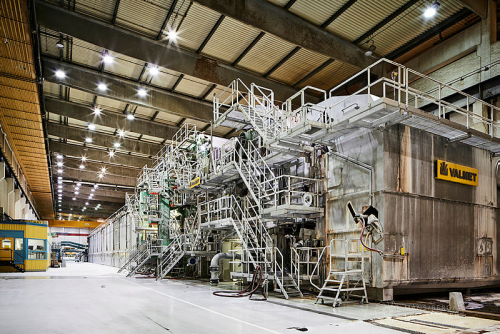 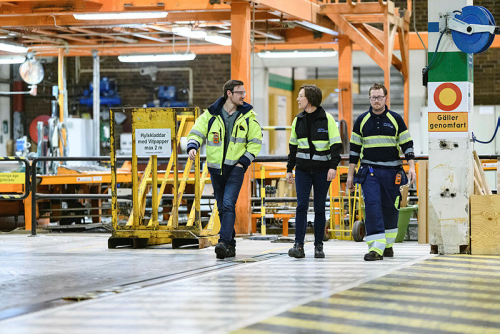 This will be my last blog post. During my time on this blog I have avoided writing much about coronavirus and how the risk of infection has changed the way we work. As you will appreciate, it has had a huge impact and people avoid the kind of large meetings I described in previous posts. I am also writing this from home, although this will not disrupt operations too much, as long as there are healthy employees on site that I can keep in touch with.

I hope you have gained a little insight into the work of a production engineer at Hallsta Paper Mill.