The little insect is causing severe damage to the forests of Götaland and southeastern Svealand. By attacking and killing spruce trees, it destroyed an estimated 7 million cubic metres of forest in 2019, representing a monetary value of SEK 3 billion. Now, Holmen is taking action to enable its wood suppliers to keep a check.

In order to gain an overview of the spread of the spruce bark beetle, Holmen has developed an analytical tool showing actual areas of damage on a map.

Map of own property

In order to gain an overview of the spread of the spruce bark beetle, Holmen has developed an analytical tool showing actual areas of damage on a map. Now, the forest company is offering its private wood suppliers a map of this kind. 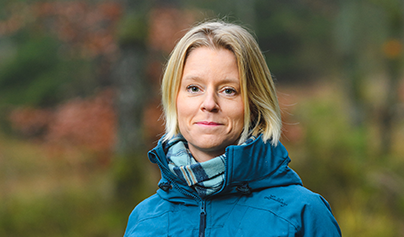 “We’re proud to be the first forest company to be able to offer hard-hit forest owners this service. It’s a further step in our efforts to develop more responsible and digitally-enabled forest operations that will genuinely benefit forest owners.

Knowledge of where and how extensive the attacks are will open up entirely new ways of conserving forest values and combating the spread of the spruce bark beetle”, says Anna Baglioni, Head of Region, Holmen Skog South.

The maps are the result of an advanced analytical tool that Holmen has developed. An algorithm based on artificial intelligence has been continuously supplied with data until it has become highly proficient at analysing attacks using satellite images. The Swedish Forest Agency has for some time offered a risk index map of areas under threat of attack. This provides a useful complement to Holmen’s map showing areas where the damage has actually taken place.

Holmen engaged in many initiatives

In order to be able to process as much damaged wood as possible, Holmen has reconfigured parts of its production facilities. For example, Braviken Paper Mill and Hallsta Paper Mill have created a special range for damaged pulpwood. Braviken Sawmill has also started exporting wood products to the USA as one way of finding a market for wood damaged by the spruce bark beetle.

At the same time, Holmen is continuing to develop its map service and will conduct a new analysis in the spring. Holmen is also active in the Stop the Spruce Bark Beetle Project, in which many actors are cooperating and joining forces.