Holmen and the climate

We increase our forests climate contribution by cultivating and harvesting our forests sustainably.

Sustainable forestry for the future

Forests contributes to the greatest climate benefit when it is managed sustainably. It grows better and wood-based products can replace fossil alternatives.

Please read mor about the climate benefit Holmen contributes to.

Holmen is one of the largest forest owners and wood buyers in Sweden. We take responsibility for the ecocycle of the whole forest, from seed to harvest, and work in close partnership with private forest owners.

We manage the forest actively and sustainably. It makes it grow optimally and provide the best raw material. Since we make sure that the timber stock grows all the time, we can harvest more, and at the same time get more timber left for future generations.

This means that the amount of timber in our forests increases thanks to our forest management, and thus the forests absorbs 1.3 million tonnes more carbon dioxide than they would have if we did not have this growth in our forests.

The young, growing trees absorb more carbon dioxide than the older ones and when the time is right, we harvest a renewable raw material capable of replacing fossil material.

Growing trees absorb carbon dioxide and store it in their trunks and branches. Spruce and pine grow the most in their first 100 years. As growth tails off, so does the amount of carbon they capture. When the trees become old and die, they rot and the stored carbon dioxide is released back into the atmosphere. This is part of the earth’s natural ecocycle. The regular inventories of our forests show that Holmen’s forest holdings are mainly made up of trees that are 0–80 years old, in other words, the age range in which growth is greatest.

We combine forestry with biodiversity

For us, it is naturally and possible to manage the forest so that it provides increased climate benefits and renewable raw materials while at the same time preserve the ecosystems. We even see this as necessary, because climate change poses the greatest threat to biodiversity, while biodiversity is a prerequisite for healthy forests that can cope with climate change.

We participate in a vast number of research and collaborative projects every year to find new ways of fostering growth and nurturing the environment in our forests. Projects are also conducted in natural environments adjoining our production locations to minimise our climate footprint

Holmen’s sawmills play a key role in our circular business. This is where the timber is split and the processing of the forest we have harvested begins. Our wood products value chain runs all the way from tiny seed to timber building.

Wood products from Holmen are known for their high quality and are in demand from the joinery and construction industry worldwide.

We produce customised solutions in CLT and glulam for large-scale building. Our products can all be used to replace fossil-intensive materials such as steel and concrete when building houses - even high-rise buildings! The climate benefit created by replacing fossil-intensive building materials with renewable wood is very big, and this is where active forestry contributes to the greatest climate benefit.

Thanks to the fact that our sawmills are efficient and large-scale and use advanced technology we can maximise the output from every log and make sure that as large a part of the tree as possible is turned into wood products. We refine the residual products in our paper and paper board mills.

From the residual products we make renewable paper and paperboard

Holmen has been making paper for more than 100 years and has unparalleled expertise. Our paper is lighter, but not thinner, providing customers books, magazines and packaging with high quality and overall impression, with significantly lower weight.

Our paperboard is world leading in quality, durability, and design opportunities, and has lasting whiteness. Replacing fossil plastic material with paperboard enables our customers to cut their climate impact and the risk of plastic waste reaching oceans and lakes.

Our production of paper and paperboard is almost completely fossil free and our products have a very low carbon footprint. Read more about Holmens climate targets.

We know that the raw material for our products is renewable and traceable and comes from sustainably managed forests, since it is mostly our own forests, and since we are experts in sustainable forestry in Sweden.

We contribute to a functioning recycled paper system

Even during its relatively short lifetime, paper and paperboard products continue to bind the carbon dioxide the trees have taken up when they grew, and as long as the paper fiber is recycled, it continues to bind the carbon dioxide. Holmen's production of paper and paperboard from the fresh fiber, which we call a paper fiber made from wood, plays an important role in feeding the recycled paper market with sustainable raw materials. Namely, a paper fiber can only be recycled a few times before the fiber is too weak to hold together. Then it is excellent as bioenergy and is an excellent source of energy to replace fossil fuels with.

Green energy from our land

On our land, we not only produce wood for sustainable construction in wood, we also produce renewable energy from wind and water and from the residual products from forestry we make bioenergy. Controlling renewable energy resources makes us unique among forest and industrial companies.

Hydro power is an important source of energy for society as it can be regulated and has an almost infinite lifetime and minimal climate impact.

We do this in order to take our responsibility and contribute towards a sustainable energy supply in Sweden and towards Europe’s transition to fossil-free energy sources.

Bioenergy is part of the forest's natural carbon dioxide cycle

When we harvest the mature trees, it means that the carbon dioxide that the trees absorbed while they grew either continues to be stored in eg wooden houses or other wood-based products, or is released back into the atmosphere when the biomass is burned as biofuel, in the same way as the carbon dioxide would emit if the trees with their branches, needles and leaves remained in the forest and mouldered.

Holmen does not harvest the entire growth, ie we harvest a lower volume of biomass than what has grown in total in one year. As much as possible of the harvest is used to produce wood products that continue to store the carbon that the trees captured by absorbing carbon dioxide from the air. However, there will be a certain amount of residual products from the harvest and from the production stage that can only be used for biofuel. When this biofuel is burned, the biogenic carbon dioxide is released. As our sustainably managed forests grow more in one year than we harvest, this means that the trees absorb more carbon dioxide from the air in one year than what is emitted from the bioenergy that is burned.

When the wood products become old, they are also used as biofuel in the form of recycled wood, which means that the rest of the carbon dioxide that is bound into the harvested trees is eventually also emitted. As long as we do not harvest more than the growth, this means that the forest has the ability to absorb at least as much carbon dioxide during a year that is emitted through the use of biofuels from sustainably managed forests.

By Holmen replanting all the trees we harvest, and often with trees that have even better conditions to grow than the old trees had, new trees will soon grow on the same surface. And these trees have greater uptake capacity than the trees we harvested. In addition, the trees we have harvested have made a great climate benefit by replacing fossil materials and fossil energy, and by continuing to store the carbon dioxide in the products produced from the trees.

Because the forest's products substitute fossil materials, there is an immediate and concrete climate benefit. The reduced demand for steel and concrete means that fossil materials need not to be extracted from the earth's surface. Bioenergy also contributes to less fossil energy being burnt.

The climate benefit that comes from wood-based products replacing fossil products at the same time as they constitute a stable storage of carbon dioxide, means that the total climate benefit from a fully grown tree is greater if the tree is harvested and a new tree is planted, than if the mature tree is allowed to remain in the forest.

Carbon dioxide storage in living trees is a relatively unstable storage. It became clear in the extremely hot summer of 2018 when many of the trees in the forests of Europe and North America were hit hard by the drought, with devastating insect infestations as a result. Both the drought and the insect infestations from the spruce bark beetle greatly reduced the forest's ability to absorb carbon dioxide. Storms and forest fires are other examples that risk releasing carbon dioxide from the trees.

The ability of the forests to absorb carbon dioxide is related to a number of factors: the age of the trees, how the forests are managed, the local climate, the nutrient content of the soil and the level of precipitation.

In a managed forest that is planted, cleaned, thinned and harvested at regular intervals over 300 years, a stock of wood is built up over a period of 70 years which is then mostly harvested. Wood and biofuel are used to replace other materials and sources of energy with an impact on the climate. 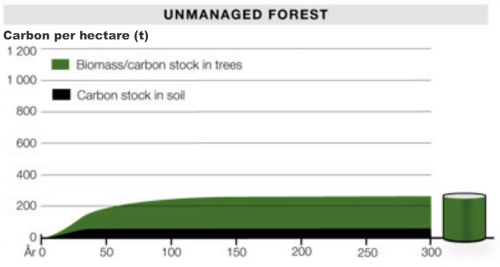 In an unmanaged forest that is allowed to develop freely over 300 years the stock of wood is built up once – and then changes insignificantly over time. The trees act as a carbon sink, but in the unmanaged forest the substitution effect goes completely unused.

All in all, this means that the climate benefit will be greater if a forest is cultivated and harvested sustainably, and used for products that replace fossil materials, then if the forest is left unattended.

Climate risk analyzes in our forestry

The Heureka system (developed at Swedish University of Agricultural Sciences) is used to conduct climate risk analyzes on our entire forest holdings.  It performs short and long term projections of timber, economy, environmental conservation, recreation and carbon sequestration. It provides several climate parameters and scenarios in which Sweden's forests are utilized and managed in different ways.  We use the result to foresee forest growth in 100 years, (5-year periods).

Increased growth is to be expected, as well as negative impact from storms, fire, floods. Our business strategy is therefore based on the expectation that we will have moderate growth in our forests and our business target is “the volume of standing timber and harvests in Holmen’s forests will increase over time”.

We adapt our forestry and plan our harvesting based on the result  to constantly ensure that Holmen’s forests grow more than the amount we harvest each year. The survival rate of forest seedlings and the need for supplementary planting is monitored 1 and 5 years after the reforestation of a clear-felled site is completed. Annual internal and external environmental audits. Also the competence among the contractors is considered to avoid mistakes.

Risk assessment for wood supply is conducted in accordance with the certifications of FSC Chain of Custody/Controlled Wood and PEFC Chain of Custody. Holmen has applied clear guidelines for purchases of wood since 1998.