Iggesund provides valuable expertise in the development of environmentally sustainable and cost-effective battery technology that supports the transition from fossil fuels to renewable energy.

The transition away from fossil-fuelled transportation and energy production to a society powered by renewable sources relies heavily on further development of battery technology. Traditional batteries based on electrochemical reactions are less sustainable from an environmental point of view and unsuitable for the rapid charging and discharging at high power over long time required by solar and wind farms.

"The automotive industry needs to reduce the cost of producing electric cars in order to contribute to a fossil-free society. For electricity production from weather-dependent energy sources, such as solar and wind power, we need to create efficient storage and power buffer conditions”, says Nicklas Blomquist, PhD in Engineering Physics at Mid Sweden University.

Can something as “simple” as paperboard coated with graphene and immersed in saltwater offer a cost-effective and environmentally sustainable path to a fossil-free society? Yes, according to a pioneering project in which Blomquist and his team partnered up with Iggesund to develop a prototype of a so-called supercapacitor – a power storage device that can be recharged in a second and release a large amount of power. Instead of using chemical reactions like traditional batteries do, capacitors store energy in electrically charged fields 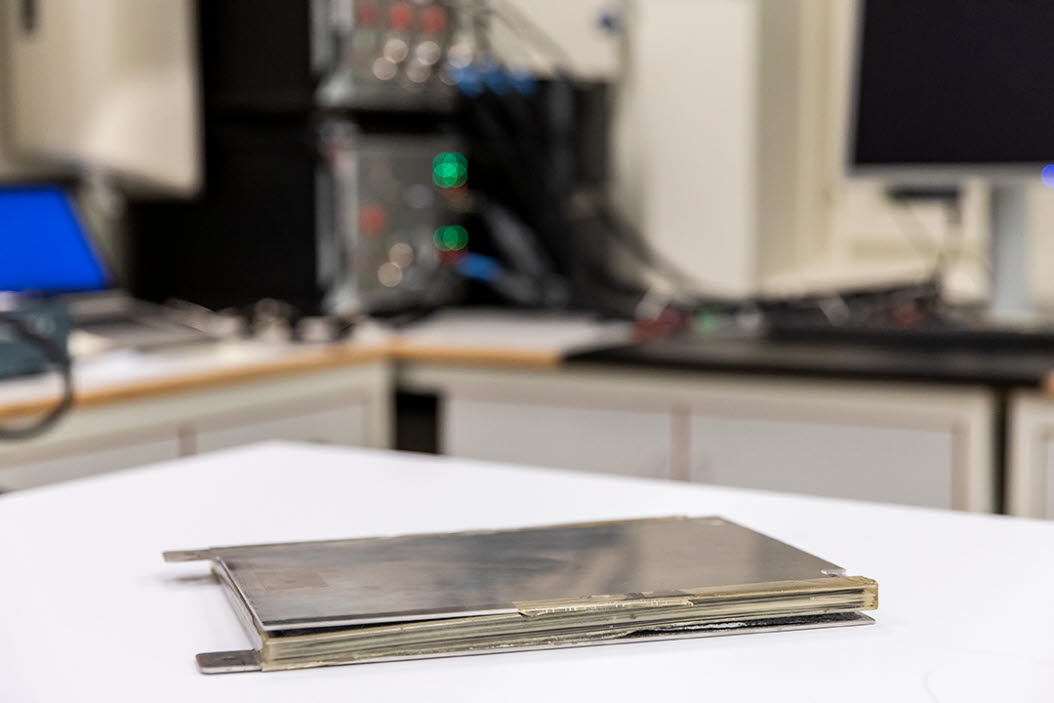 Compared to traditional batteries, these supercapacitors cost a fraction to produce and have a much longer lifetime, although much lower energy density. This means their surface needs to be fairly sizeable and the coating of the electrodes – where the energy is stored – must have the right properties.

In this pilot project, the researchers used graphene – an atom-thick layer of graphite – mixed with water and cellulose as binder, as electrodes. (Graphite is a crystalline form of carbon where atoms are arranged in a hexagonal structure like a beehive). Applying such a complex compound to a substrate, however, requires genuine expertise in coating, which made it natural for the researchers to turn to Iggesund.

“Iggesund has been an important partner in contributing invaluable expertise and equipment to move from lab-scale tests to full-scale industrial production”, says Blomquist. 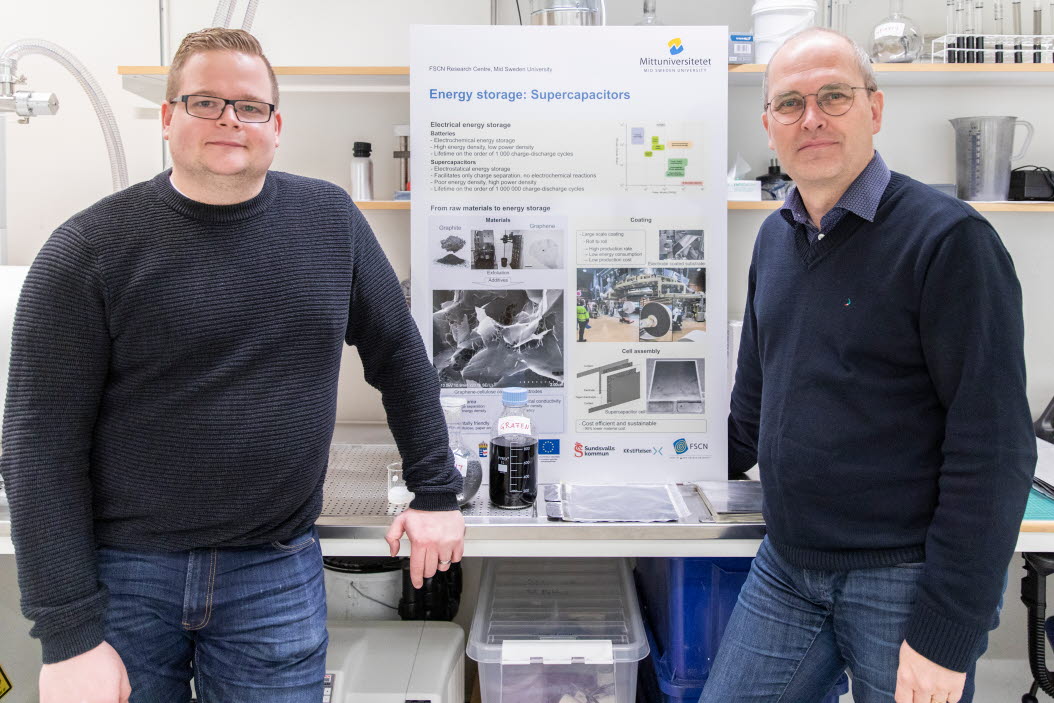 Scientist Nicklas Blomquist from Mid Sweden University and Johan Lindgren from Iggesund with prototypes of the so-called supercapacitor.

At Iggesund, Johan Lindgren, PhD and Area Manager Development Projects, comments: “Iggesund has long been recognised for its deep expertise in coating. In collaborating with Mid Sweden University, we have gained an even deeper understanding of how different types of material behave when used as coating and how they react with paperboard.”

Since the performance of a supercapacitor is highly dependent on the conductivity, surface area and structure of the electrodes, the coating expertise proved instrumental to the success of the project.

“Iggesund knows a lot about coating and how the paperboard reacts to different types of coating colours together with various parameters such as the speed of the coating, the rate of absorption and the texture of the coating colour used. Coating colour made from nanomaterials is very shear-thinning, which means it changes from watery when stirred, to solid when not stirred”, explains Blomquist.

While supercapacitors have been around for a while, the innovation lies in using only sustainable materials in producing the new capacitor, along with water-based solvents – instead of organic – in both coating colour and electrolyte. The raw material for the new “superbattery” sounds deceptively simple: Paperboard, graphite, cellulose and saltwater – powered by the sun, the wind and the waves.

“It doesn’t get more sustainable or harmless to humans. You can even eat it”, says Blomquist.

While it probably wouldn’t taste very good, the innovation provides appetizing food for thought on the road to a fossil-free future just around the corner: “In 2020 we believe full-scale demos are within reach.

When nuclear power is being phased out, solar and wind power will assume a greater role in the energy mix. This makes storage and power buffering of renewable energy crucial and we believe our innovation may be instrumental in this”, Blomquist concludes.