Analogue or not – the die is cast

The die is cast

There is a lot of talk about digitalization and digital solutions, and what it does to our brains. Studies show that when online is the new normal, people actually turn to analogue solutions for recreation and inspiration. Books and magazines are excellent examples of this, and now the turn has come to boardgames.

Since the dawn of time, man has enjoyed playing games. With the introduction of TV and online games, we have seen a whole new dimension of gaming, introducing new professions like gaming programmer, technical artist and game animator. There’s even a world championship in e-sports. At the same time, and perhaps as a direct counter-reaction to this, boardgames are riding a wave of success. The digital era has stimulated interest in old-school, analogue games, up to the point that some talk of a renaissance or new golden age for boardgames.

Regardless of whether the game you’re playing is analogue or digital, online interaction over the internet has been indispensable in bringing together boardgame fans from all over the world. The renaissance of boardgames as a global trend is all down to online forums like BoardGameGeek.com. Many gamers ask for local language versions of the games too, and the requests for such licenses have risen steadily. In a way you could call it a shift in paradigm – today the fostering of a global community is no longer dependent of trade or diplomacy but by gamers.

Another advantage of boardgames is the great value-for-money. Not least in times with a weak economy, since boardgames offer an excellent rate of return on one entertainment dollar. For the average price of a videogame, you get to own a boardgame for good, as opposed to just a license to play it. And while the licenses can expire, you can easily swap, sell or give away a boardgame, which only enhances the community spirit. A sustainable dimension of gaming, and a lot like the trend we see in the book market!

Looking at the up-swing of boardgames, what’s driving it? If you ask the most hardcore boardgame fans it seems to be more of a “Holy Trinity” that has attracted new board gamers over the last two decades: Settlers of Catan, Ticket to Ride and Carcassonne. They were all launched in the 90s or 00s, making up what enthusiasts refer to as “Euro-games” – strategy boardgames with medium-length playing time and a theme emphasizing collaboration rather than conflict. Boardgame veterans, however, seem to like pretty much the same things they always have – historical, fantasy or sci-fi games account for the lion’s share of sales. A constant in a changeable world.

Alan Emrich wasn’t cool in middle school. He played boardgames, and in the early 1970s that made you a ‘geek’. But much has happened since then. These days, as the founder and studio manager of indie-games maker Victory Point Games, Alan Emrich works in an industry that is über-cool. And teenagers nowadays are considered geeks if they aren’t playing computer and board games.

“I do give myself a slice of the credit and the blame for that turn of events. In fact, I worked hard to make it happen during my forty-plus decades in the games and gaming industry. I wanted to make it possible for everyone to enjoy games as much as I do, and most people do, now that games have been mainstreamed and generally adopted.

But the computer revolution and the internet played a part too. In the case of boardgames, it’s been similar to books, in that the digital era actually boosted rather than suppressed sales of an analogue product, which, in theory, might have been seen as obsolete”, says Emrich.

According to The Guardian, boardgame sales actually rose by 25-40 per cent annually in the early-2010s. Some are claiming boardgames to be in renaissance or a new golden age, and there is nothing to indicate that this is just an incidental spike.

To Alan boardgames are also bringing people closer. “You learn more about someone from an hour spent playing a boardgame than in a year of conversation. Boardgames were always able to do that. But in our hyperconnected tech era, we appreciate more than ever the closer interaction with people that happens over boardgames because they are more reflective than reactive.

”Being analogue doesn’t stop some boardgame makers from tapping into the digital potentials of computerization and the internet. Alan’s Victory Point Games, for example, operates in both analogue and digital media in that it offers certain boardgames as apps so they can be played on a tablet.

Annika Furuvik is Development and Marketing Manager at Alga, one of Scandinavia’s leading board-game makers. According to her, boardgames offer something that digital alternatives will never really be able to replace.

“We need to “go-slow” and to interact socially. We believe that boardgames are unbeatable for re - creation with family and friends. We need something to offset the cyber world we otherwise inhabit”.

Contrary to many other boardgame makers, Alga hasn’t yet decided if it wants to go digital. Annika puts it like this:

“At the moment, we’re purely analogue, but we’re following developments with a keen interest. In particular, we want to see what the big international game producers do. Personally, I think we need to exercise some caution. We don’t want our games to require players to be connected during the game  – because we’re actually championing offline interaction!”

She claims that classics and quiz games in different variants are still going strong, and are set to carry on doing so in the future.

“Niche games get a look-in, but we tend to see more of them on the bigger markets. The Nordic markets are small, and that means we tend to think in terms of slightly broader consumer segments”, she says.

The near-future trends in boardgames are hard to forecast, but Annika likes to stay up to speed on the latest industry trends by attending the major international trade fairs. In the end it is still the well-designed and well-developed games that stand the test of time, and that best serve and reinforce the gamer/player community. 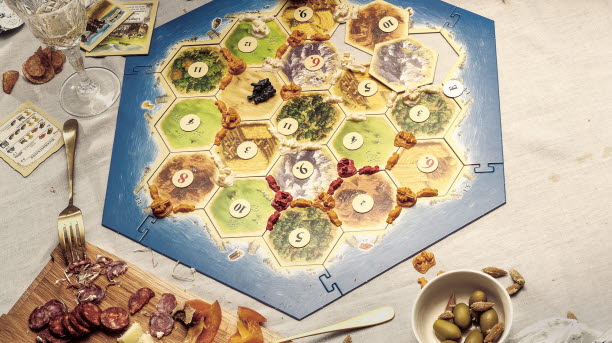